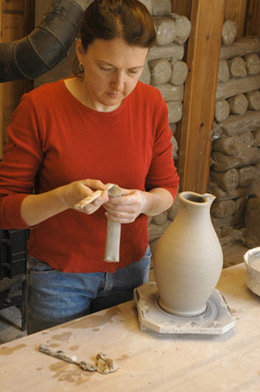 I first became interested in pottery when I was in my early twenties living and working in Japan. My eyes opened to the world of the handmade object and I began by starting a modest pottery collection. It was several years later, at a small community studio in New York City, when I took my first pottery class. As luck would have it, my first teacher, Louise Harter, was building a wood kiln for the studio in upstate NY and I became a part of her building crew. I was definitely hooked, and quickly started plotting how I could make pots full time and leave my day job.

I loved wood fired pots from the beginning, but I was equally attracted to what I saw as the wood firing potter’s lifestyle. Beautiful kilns and studios out in the country, the balance of indoor and outdoor work, the crackling of the fire, the camaraderie around the kiln – I wanted it all. I began looking for an apprenticeship situation and received a very lucky break when Jeff Shapiro agreed to introduce me to a teacher in Japan. I remember well one November evening in 1993 when Jeff called and said that Bizen master Isezaki Jun was willing to take me into his studio as an apprentice.

My two-year apprenticeship in Bizen was quite a traditional one. The other two apprentices and I were responsible for cleaning the studio, hand processing the clay, weighing and wedging clay balls, packing pots, stacking wood, readying the kiln for firing, and taking firing shifts. Whenever possible, I jockeyed for the position inside the studio, wedging, rolling out coils or being ready to remove finished boards of pots from the wheel so that I could be close to Sensei and observe his work.

Isezaki Sensei was always amenable to answering questions, and was willing to initiate or be engaged in conversation about pots from time to time, but he didn’t provide a daily running instruction on the workings of the studio or any sort of formal critiques of our wheelwork. We learned the workings of the studio by participating in the cycle of making pots and firing them. We were expected to practice our throwing at night, and every once in a while, Sensei would come in to the studio and look at what we were doing and say something like, “that lip is a little tight, isn’t it.” Praise, or at least what I chose to interpret as praise, was indirect. During a kiln loading, he might ask one of us to grab one of our pots that had been sitting on the shelf for months, one that he had never commented on, or he might ask one of us to make a run of production wares for a big order.

It took adjustment on my part to learn what I was supposed to from my apprenticeship. There is a saying in Japan that an apprentice has to “look and steal” things and to a large extent that was true and sometimes frustrating. The other side of the story is that the learning process was a two way street – sensei’s whole studio and way of working was generously laid out in front of us, there for the taking if we could intuit what to make of it. We had to be constantly questioning within ourselves and attuned to the lessons of the daily work. By being fully engaged in the questioning and learning process, the lessons stuck.

I moved to Maine in 1996 and began the design and construction of a 24-foot long Anagama tunnel kiln. The kiln took about eight months to build and I had pots made and was ready for the inaugural firing in October 1997. I was armed with the lessons of my apprenticeship. I remember how helpful it was during the first loading and firing when I had a whole crew looking to me for direction, to have a tried and true “way” to fall back on. Throughout the process of building the kiln and getting started, it eased a lot of doubts and was confidence building to let myself go through the motions of what I had done plenty of times before.

The anagama holds about 800 pots and I do two firings a year, in May and October, with long making cycles in between. I make a wide range of tableware, vases, and large garden jars. I still fire similarly to the way we did in Bizen, though I have gradually discovered new techniques and made changes, especially in glazing and loading.

I love the anagama firing for the depth and beauty that it imparts on the pots. But the anagama fills other needs as well – the needs I have to make lots of pots, to stack wood and do other physical, mind-clearing work, and to sit and enjoy a quiet shift with the kiln. I relish the community of potters and firing friends that gather around the kiln twice a year. I enjoy the rhythms of the process and the scale that I work on as it makes me feel connected to the seasons, strong and competent.

“My desire to make pots, fill the studio, fill the big kiln, never seems to wane.
I am so thankful that there is always a next firing and another pot out there.